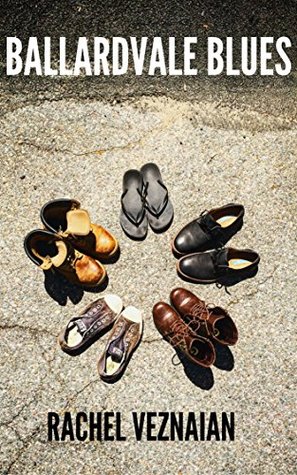 Addie Dalca dances on the line between what her life is and what it could be. Anchored by family expectations and those who pledge undying fealty to the Ballardvale lifestyle of booze-fueled nights followed by hangover filled days, Addie feels complacent with the familiar faces of Jessica Sukkel and Danny Boivin. The recent return of her childhood friends Sam and Kate Kern provide an attempt at retracing the plans laid out for her long before. Friendships intertwined in a messy web splinter and slowly break as the warring belief systems of those in their early twenties come to lure the five friends into separate offshoots, leaving Addie wishing she had a life plan as clear as those who surrounded her.

This review is sponsored

Ballardvale Blues is a wonderfully relatable coming of age story that follows five people in their twenties as they must choose their paths for the future–stay in the small town or branch out?

This novel is set in the small town called Ballardvale, it was an interesting setting and it led as the basis for the plot. As it was a small town everyone appeared to know one other and the people and events were all intertwined in some way, which I loved.

Veznaian’s writing was slightly different to other books I have read, it contained a lot of speech and it felt very relatable and laid-back. It was told in the third person but it would seamlessly change focus from one character to the next in a style that I loved, it made the narrative flow effortlessly.

There are five main characters in this novel that we follow– Addie, Sam, Kate, Jessica and Danny. All these characters were born and raised in Ballardvale, they used to all be friends and spend a fair bit of time together. However, as Sam moved to New York and Kate went to med school they seemingly drifted apart a little bit. Now they are all back in the small town for a short while and they catch up on their missed time together. Sam was my favourite character, I loved how independent and sure he was of escaping Ballardvale and moving to New York, he had everything laid out for him. I also really enjoyed reading about his sister, Kate, she had decided to move away with Sam and knew she wanted to start somewhere new. Unlike Sam and Kate that wanted to move or Danny and Jessica who were sure about staying, Addie was torn between the two. Addie felt as if she were tied to her parents and their restaurant she would be taking over one day. I really felt for Addie and I was rooting for her to leave her hometown, to spread her wings and live a life free from her parents’ rules. Addie’s storyline was definitely the most intriguing as it was a constant push and pull battle for her and it was difficult to decide what the ‘right’ decision was.

All the characters felt so real and relatable, their conversations and actions felt exactly like those of new adults nowadays and I felt like this really succeeded in getting the story across to the reader easily. I really connected to this story, although I’m not from a small town I understand how after high school everything seems to shift and evolve. People change for the better or for the worse, people grow apart and friendships and relationships are altered, nothing truly stays the same.

Overall, Ballardvale Blues was a fantastic read with five incredible characters, a relatable story with a great message behind it.

Welcome! I’m Katie, an 19 year old bibliophile that lives in Melbourne, Australia. Join me as I gush about books and share my love of reading!

There was an error retrieving images from Instagram. An attempt will be remade in a few minutes.